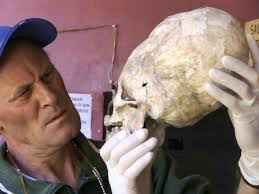 "Ancient Civilisations" Brien Foerster was born in the US, but moved to the west coast of Canada as a child, where he became immediately fascinated by the Native traditions of people such as the Haida. He learned to carve totem poles, canoes, masks and other ceremonial things from master Native carvers, and became a professional sculptor at age 26, basically dropping his career as a marine biologist.

The Inca were the largest civilization in the pre-Colombian Americas and are attributed to have created some of the finest megalithic structures ever produced on earth. However, oral traditions and scientific evidence are shedding light on the reality that up to three more technologically advanced cultures preceded the Inca, and that some of the finest stone works date back more than 10,000 years.

Modern engineers are baffled by how these structures were made, and have to speculate that long ago vibrational high technology must have existed. Also, the presence of people with elongated skulls are found wherever the megalithic structures exist. This presentation will discuss the inter-related nature of the magnificent stone structures of ancient Peru and Bolivia, and those that created them in the very distant past. www.openmindconference.com

On an island in the Nile of southern Egypt there is a stone box made out of solid granite. The dynastic Egyptians with their bronze tools could not have shaped it and thus it appears to be a remnant of a much older high tech culture.