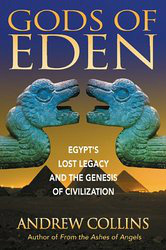 Andrew Collins was raised in the Essex town of Wickford. As a teenager, he became a UFO investigator, and in 1977 he investigated the first-ever missing time abduction case reported in the UK, and that investigation changed his life. He became a journalist with the magazine Strange Phenomena and openly sought the help of psychics in an attempt to better understand the relationship between UFOs, prehistoric sites, earth energies, and the human mind. As a science and history writer, he has authored a variety of books that challenge the way we perceive the past, including his best-selling The Cygnus Mystery, that delves into how ancient monuments and temples, that are still standing today, were built with an orientation towards Cygnus. He continues to speak and travel throughout the world and is currently working on a book about Gobekli Tepe. He leaves near Marlborough, Wiltshire, in the UK.